The idea of a memorial to the dead of the Great War was addressed by the Bishop of Chelmsford as early as November 1916, when he wrote an article in the Diocesan Chronicle expressing concern that any such memorial must be of sufficient artistic merit to make an impression on worshippers "in the year 2000 AD", and he cautioned against individual memorials in churches, recommending instead a Roll of Honour at the end of the war.

The Mayor, Alderman W Cowell, first proposed a war memorial for Chelmsford at the Town Council meeting on Wednesday 27th November 1918 and a public meeting was held on Monday 16th December 1918 at which, following discussion, the council reacted in its usual way by appointing yet another sub-committee. A Mr E P Bucknall submitted a plan for monument which he had prepared, which would cost around £3,000 if built of marble. The War Memorial Committee first met on 20th January 1919, at which it was decided that the primary purpose of the memorial "should remind the present and future generations of the supreme sacrifice made by Chelmsford officers and men in the war".

In March four memorial schemes were selected from twelve proposals, including a "Victory Ward" at the Chelmsford & Essex Hospital; a Town Hall and Memorial Hall; a monument in the lower part of Duke Street; and a memorial playing field. By early March the Town Hall and Memorial Hall plan had been chosen, and the public were invited to contribute funds. The Memorial Hall was to be "an inspiring building, with organ, gallery, platform, pillars, stained glass windows, statues, pictures and so on..." By July a £500 gift had been received from Mr George Courtauld, of Halstead, towards the proposed "War Memorial Hall" and concerns were raised that the fundraising for the hall would conflict with a campaign by the hospital, which was seeking £20,000 for an extension.

A heated council meeting in September 1919 saw the approval of a site for the new municipal buildings and memorial hall at the corner of Rainsford Road and Coval Lane, on 2 acres and 320 square yards of land for £2,700. Criticisms of this site included that for Springfield and Moulsham councillors this was at the "extreme end of the borough" and the proposal was rejected at the October meeting. In December it was announced that the War Memorial Sub-Committee were to look at two further sites. In February 1920 they reported that they had identified a site on London Road between the Manse and the Cloisters (now under the Parkway) which was suitable for the joint building (£750), and also that Rainsford House, on the corner of Duke Street and Coval Lane, would be a good site for the municipal offices.

By April 1920 there were complaints from the public about the lack of progress with the Chelmsford memorial, when memorials had been erected by villages and hamlets throughout the land. This appeared to galvanize the council, and the it was announced that the London Road site would be acquired and an appeal for funds was launched on the 9th June. By July the whole idea of a memorial hall was dropped, following the poor response from the public (the hospital appeal had by now raised nearly £20,000 and was looking to continue with further fundraising).

By October 1920 the whole process of the Chelmsford War Memorial was re-started; and in November, in the absence of a borough memorial, the first Armistice Day ceremony was marked with a service of commemoration at the Cathedral.

The sub-committee continued its deliberations and by March 1921 they were considering some form of monument, to be sited either in place of the Sebastapol Gun in front of the Shire Hall, or in place of the statue of Judge Tindal (to be moved inside the Shire Hall). In July the decision was taken to move the Tindal Statue to Bell Mead and that the Chelmsford War Memorial would be erected in Tindal Square. There would be an open competition for designs.  The competition was arranged under RIBA guidelines and 87 designs and models were considered. Incredibly, at the September council meeting it was announced that the winner was Mr W Hamilton Buchan, of Battersea. It was to be 27' 3" in height, made out of Portland stone, and would cost £2,750. His prize was 10 guineas. An appeal was made for £2,300 from the public.

£1,606 had been raised by the end of March 1922, and there was an increasing feeling that the Tindal Square site was not satisfactory. The sculptor wrote to the council offering to reduce the height from 27' to 24' 9", which would cut the cost to £2,745; and that once given permission to start it would take him ten months to finish.

Meanwhile the plans for new council offices at the Rainsford House site had been approved and so there was little surprise that at the September council meeting it was announced that the Tindal Square plan had been abandoned and the memorial would be erected on the east side of the new council chambers. A cenotaph-type design was suggested, which would keep costs within the £2,000 or so that had been raised. It was further suggested that a semi-circular portico would be set up at the entrance to the council building, with the names of the fallen inscribed on panels and, funds permitting, a stained glass window. March 1923 saw a decision to press ahead with the cenotaph monument, noting that the portico and panels were a separate project, and in June the Borough Engineer, Mr Ernest J Miles, produced a model of the monument to be erected in Duke Street "ready for unveiling on Armistice Day". Names of the fallen were to be placed on bronze panels, and families were asked to submit names to the Town Clerk's office. In August the local masonry firm of Wray and Fuller were invited to construct the memorial for £990, employing ex-servicemen for the work. The bronze panels would cost £250, and the balance of the fund would be used for a window. Work began quickly.

On the 1st October 1923 the Mayor, Alderman Fred Spalding, led a ceremony involving members and officials of the council, in which a casket of Portland stone lined with lead and filled with "records of local and national interest, specimen war medals, etc." was lowered into a cavity at the base of the unfinished memorial.

Finally, on Sunday, 11th November 1923, Vice-Admiral Sir Roger Keyes unveiled the Chelmsford War Memorial, in front of a number of distinguished guests and civic dignitaries. The guard of honour was provided by 5th Battalion the Essex Regiment, and a large crowd witnessed the ceremony. Wreaths were laid by ex-servicemen and voluntary groups including the Girl Guides and the Boy Scouts. 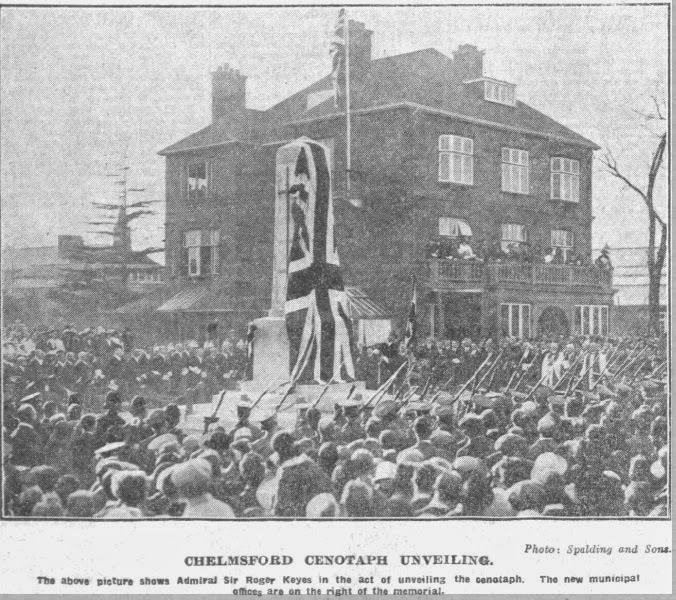