Interesting postcard showing Broomfield Road, dated 1917. The pub is, of course, the Compasses, a much smaller building than it is today. The wall on the right hand side can still be seen, and the Cedar of Lebanon brushing the top of the wall now towers over the road. The 'x' marks the area where the author of the postcard was billeted, one of the big houses like Rannoch Lodge. 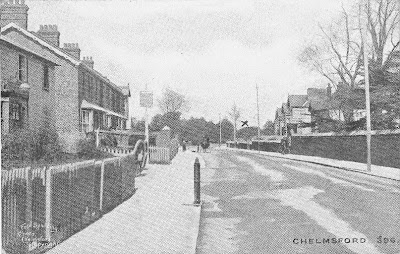 And then a standard postcard of the High Street, junction with Springfield Road. 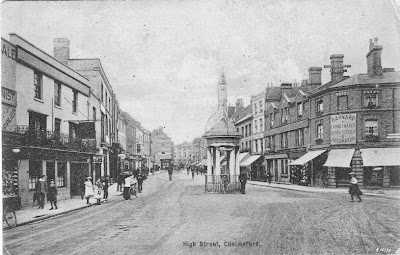 Both of these postcards were sent by the same man, 'Willie', to a Miss Hilda Myers, of Hill Crest, Carlton Drive, Heaton, in Bradford. From the language used in the letter Hilda seems to have been young, and in the Broomfield Road card there is a mention of Mother and Father. A search on ancestry.co.uk throws up a William Peel Myers, aged 13 in the 1911 census, and living at the Hill Crest address with Hilda and parents William and Clara Myers. Father was the managing director of the family firm of S. P. Myers & Co Ltd, a worsted manufacturer in Bradford. 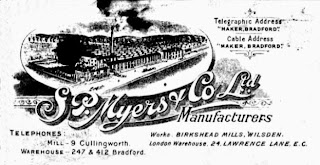 William junior's military records still exist. He attested shortly after his eighteenth birthday in October 1915, under Lord Derby's Group Scheme (ie not conscription); and was called up on 9th May 1916, when he joined the 2/5th Battalion of the Yorkshire Regiment. He was sent to France on the 3rd of August where he joined his unit in billets.

The big question is what was William doing in Chelmsford in late 1917?

It would appear that he suffered a number of health problems. In addition to scabies he suffered from impetigo and was hospitalised in Cheltenham in November 1916 and after another attack in June 1917 his medical category was downgraded to B1. His eyesight also caused him problems and in October 1917 he found himself at the military ophthalmic centre no. 19 at Chelmsford. It was at this time he sent his two postcards to Hilda.

Unfortunately we have no records of this important medical facility. There were several of them around the country, including Lincoln, Manchester and Nottingham, and a number were attached to Casualty Clearing Stations in France. From what we know of the medical personnel at the Chelmsford and Essex Hospital there were no ophthalmic specialists there, so we might conjecture that the military hospital at Oaklands might be the location. According to the British Medical Journal these were set up in early 1916 'at important stations in the various commands'.

By January 1918 William had been fitted with spectacles and was sent back to France with the 1/5th Battalion, Yorkshire Regiment. In May the Germans launched a major offensive which advanced rapidly through Belgium and France. William was taken prisoner and was reported missing on the 27th May. He spent the rest of the war at Sprottau prisoner of war camp in in lower Silesia, Poland, and was repatriated in January 1919. Thanks to his father's efforts, he was released from military service the next month to return to his job as a clerk and assistant manager in the family business.

William Peel Myers died in December 1980 at the grand old age of 83. He was just one of thousands of men who passed through Chelmsford during the Great War.
Posted by MrSwan at 08:52