I had the honour of unveiling the beautifully restored Chelmsford School of Science and Arts war memorial at Anglia Ruskin University yesterday. 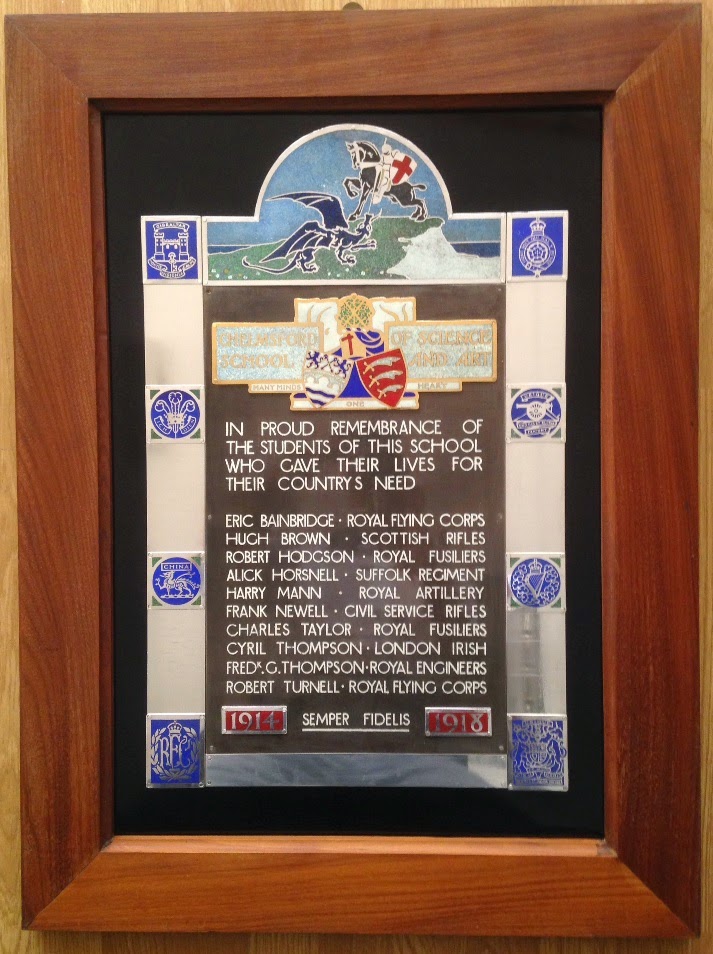 This plaque was designed and produced by staff and students of the Chelmsford School of Science and Art as a memorial to their ten fellows who gave their lives in the First World War.

The plaque was unveiled on 10th December 1923 and it was originally mounted in the entrance to the School in the Frederick Chancellor Building on Victoria Road South. In 2008 it was removed and following restoration by Richard Rogers Conservation it was installed and re-dedicated here on the 4th November 2014.

It was designed by Frank Isom and executed by his fellow students, under the direction of the School principal, Charles Henry Baskett RE. The centre panel is of copper and is flanked by silver strips. The County and Borough arms are mounted below the enamel of St George and the Dragon on the White Cliffs of Dover. Clockwise from the top right the regimental badges are interpretations of those of the Royal Fusiliers, Royal Field Artillery, London Irish, Royal Regiment of Artillery, Royal Flying Corps, Border Regiment, Civil Service Rifles, and the Suffolk Regiment.

The Chelmsford School of Science and Art was a precursor of Anglia Ruskin University. The Art School was heavily influenced by the Arts & Crafts Movement and it produced many successful artists. Newell was a National Competition prize-winning art student and assistant teacher and he left a number of etchings and engravings.

The architecture course drew on both the Art School and the Science Department and Horsnell was a nationally regarded architect, exhibiting at the Royal Academy. Turnell and Mann were student architects and the three of them dominated the annual pre-war prize giving ceremonies.

The Science Department offered courses in mechanical and electrical engineering for the apprentices of the large industrial concerns in the town, such as Hoffmann’s Manufacturing Company, Marconi Wireless Telegraph Company, Crompton’s Arc Works, and Clarkson’s National Steam Car Company. Bainbridge, Brown, Hodgson and F. Thompson were all engineering students.


C. Thompson, the son of the proprietor of the Essex Chronicle, briefly attended the School to earn himself a shorthand certificate. Unfortunately no records of Taylor can be found.
Posted by MrSwan at 22:57