"Guns in Flanders heard and felt"

Special Constable Herbert Gripper made this comment in his logbook following his night patrol on New London Road on Tuesday 27th June 1916.

Mr. Miller Christy, of Chignal St James, was invited to the Royal Meteorological Society in London on the 22nd June, where he delivered a talk about repeatedly hearing gunfire from Flanders since early in the war. He pointed out that his house was at an elevation of 155ft, and that there was no higher ground between his house and the front line in Flanders, some 125 miles to the south east. He was able to describe the sound of British warships shelling German positions on the Belgian coast, as well as artillery fire ranging from four or five shots per minute to more than one hundred. He also confirmed Gripper's observation, that the gunfire was more of a "dull and distant thud which was felt rather than heard". 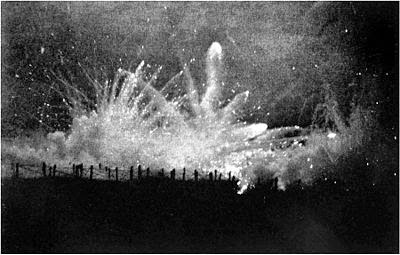 Christy had kept a diary of the nights on which gunfire could be heard. In May the previous year he had heard a large calibre German gun shelling Dunkirk. Bombardments were heard in July and August, and on October 6th 1915 "a loud explosion greatly excited the pheasants in the woods". Further gunfire was recorded in November, and in January and February 1916.

Gripper and Christy were not alone in hearing the guns. Reports had come in from the Temple, in London, and from Cricklewood, Hampstead, Lewisham, Wimbledon, Loughton, Eastbourne and Broadstairs, and from people such as Lloyd George and Sir Arthur Conan Doyle.

Mr William Marriott, the assistant clerk to the RMetS, provided the meteorological explanation that sound travelled better in cloud, rather than in a clear sky.

This story was picked up by the press and was widely reported around the country, and even as far afield as New Zealand. But the newspapers got it wrong: they simply assumed that Christy was making an immediate report to the RMetS, and most of them provided a one sentence news item that "Gunfire was heard in Chelmsford on the 20th June", with some suggesting that it was the guns in Ypres, Dixmude or Arras. But there was no gunfire heard in the town that night, because the Ypres sector was quiet, as the Army shifted its attention further south.

The Battle of the Somme began on the 1st July 1916 and was preceded by one of the heaviest artillery bombardments of the war up to that time. The Somme barrage started on the 24th June, and for five days British guns pounded the German barbed wire, trenches and communications, along a 25 km front.  There is no doubt that this is what Gripper heard - and felt - later that week.
Posted by MrSwan at 05:01